Drawing with Light during Earth Hour 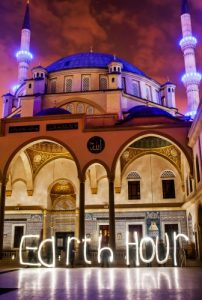 Nine people lined up in the camera frame. Each wrote a letter spelling Earth Hour backwards with a Consol Solar Jar in their hand so that it appeared right reading and pointed directly at the camera. The exposure was 15 seconds and they had to move the Consol Solar Jar in as wide an area as possible. If you look behind each letter, you will see the ghosted figure of a person holding their Consol Solar Jar. 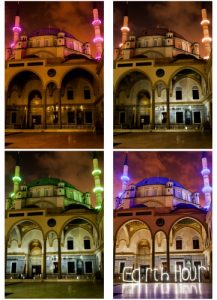 With all the interior lights switched off during Earth Hour, 12 Consol Solar Jars were placed upside down to shine up and light the archways, balancing the interior exposure with the exterior lighting of the clouds and turrets. The contact sheet shows four images:

Suntoy promises to give our planet a brighter future, the eco-friendly way, by making every hour a solar-power-hour.