Here’s a bright idea! Transforming a flat logo into a large-scale three-dimensional (3D) sculpture of light! Made out of approximately 400 Consol Solar Jars, the Save Electricity logo was built by Mark Stead at the V&A Waterfront in Cape Town for Earth Hour. This public artwork truly did save on electricity being eco-friendly and powered by solar energy only.

Conceptualization must have been easier than execution, though just as much fun. Building the corporate logo carefully – very carefully – by arranging Consol Solar Jars strategically, creating the intended form. Almost like building a giant tower of blocks while playing a wobbly game of Jenga. 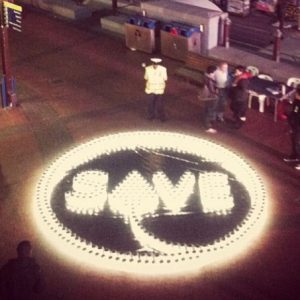