High above Tolip Street, a City Power employee repairs an overhead power-line cable after the theft of copper cables left Melville in darkness. On closer inspection, we realise that the technician is using a Consol Solar Jar to light up the entangled cable mess left behind by the thieves.

“This job was made very difficult because they only had one torch amongst a team of six City Power technicians,” says Jacques Wallis, manager of Room With a View. He had been using Consol Solar Jars in his guest rooms, reception areas and on his walkways for over a year and promptly offered the City Power team these solar lights. The neighbourhood was elated to have their power restored at midnight – with thanks to City Power, Jacques and the Consol Solar Jar!

Who would have thought City Power, a close relative of Eskom, would find such an appropriate use for our Consol Solar Jars? Makes one think, doesn’t it? 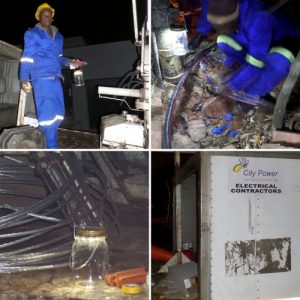