Sodwana Bay is an unspoiled environmental jewel on the east coast of South Africa along the KwaZulu-Natal shoreline. It is the perfect setting to take the Consol Solar Jar for a scuba dive to discover the rich natural bio diversity on the Indian Ocean’s floor.

Stefan Neubig of Sonnenglas went on a mini-vacation to this beautiful spot. He put a 1kg weight inside a Consol Solar Jar (CSJ) so that it would sink easily. He added an absorbent sachet to prevent moisture within the jar because of the temperature difference on land and at sea (32 degrees on land vs. 26 degrees at 20m under the sea). No modifications were made to the Consol Solar Jar at all.

Stefan and his CSJ took a shallow dip in the pool at the diving school and reached a depth of 5m. Then the duo embarked on their deep-sea adventure. They reached a depth of 19.8m and our amazing solar light shone on the ocean bed. After both adventures, the CSJ returned to the surface without a drop of water inside its glass jar, working perfectly on dry land. Its electronics, including all the marine life, were unharmed. Waterproof proven! 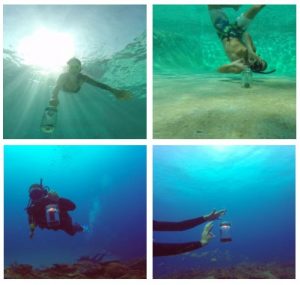 Harald Schulz, Suntoy Technical and Managing Director, explains: “What makes it watertight is that the inside of the Consol Solar Jar is sealed via a rubber ring from the outside. We employ a magnetic switch so there is no pathway for air or water to enter. The jar is thus water and airtight. Stefan’s photographs confirm that very nicely. It is not a technical marvel, as any jar filled with jam will do the same. It is an excellent demonstration of the build quality of the Consol Solar Jar.” 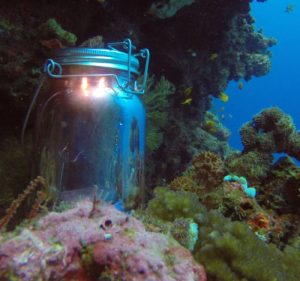 Beautifully captured, Stefan! These images are worthy of a huge wow!